How THINK450 Changed the NFT Game

On this episode of The Brainbase Podcast, we’re joined by Josh Goodstadt from THINK450, the NBPA’s licensing and business development entity. 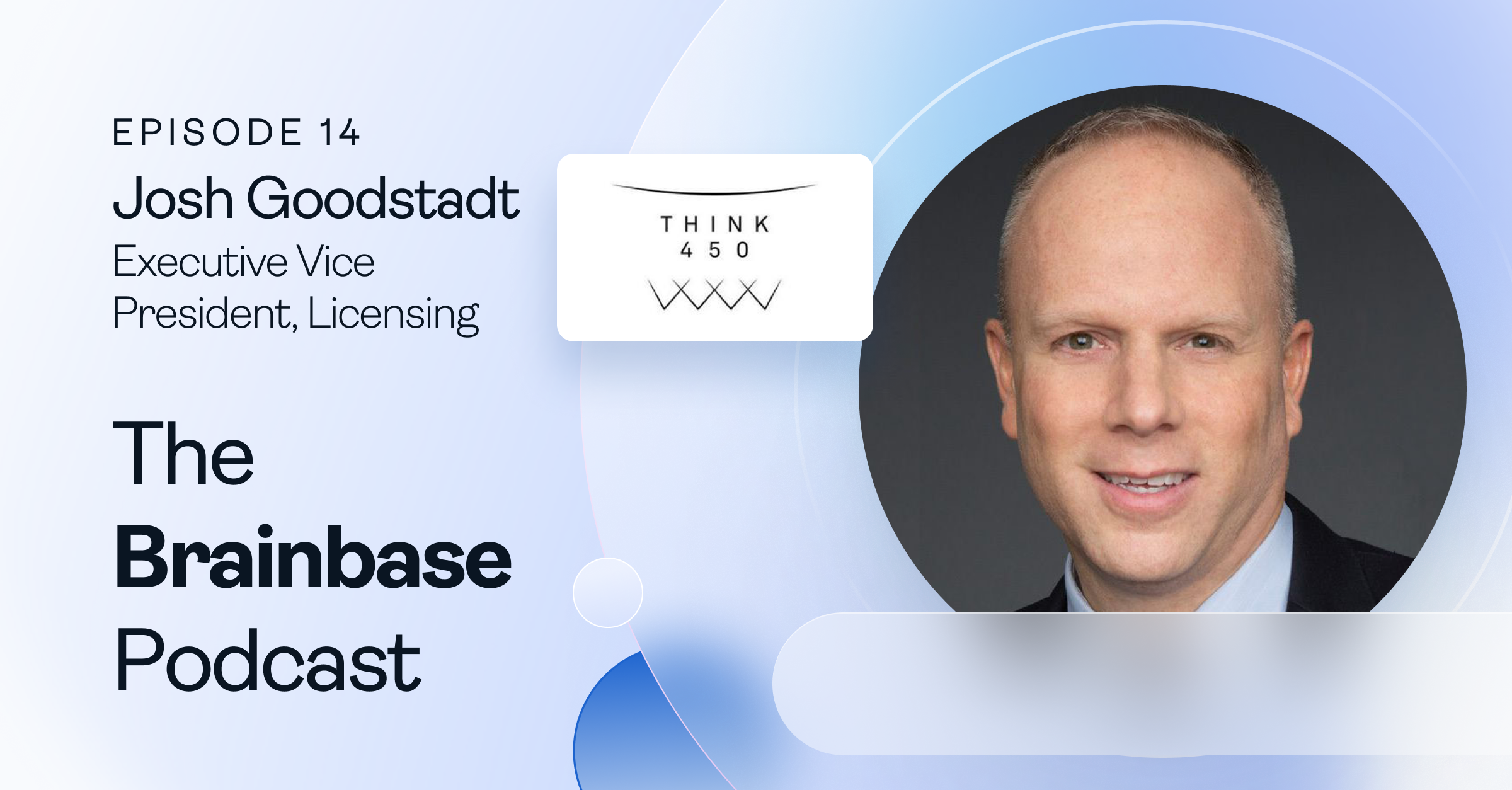 Josh has had a successful career spanning licensing at the NFLPA, HBO (including managing the licensing for Game of Thrones), and most recently at THINK450. Over the last few years, THINK450 played a vital role in the creation of NBA Top Shot, which Josh describes as “an entirely new way for fans to connect with their favorite athletes.”

If you’re unaware, NBA Top Shot is a marketplace where you can buy NFTs – completely unique digital tokens- of highlights featuring your favorite NBA players. The NBA describes it as “trading cards” mixed with “cryptocurrency”. And, since the pandemic, NBA Top Shot’s popularity has skyrocketed.

Listen as Josh discusses his journey into sports licensing, working at HBO, and being at the forefront of the NBA Top Shop & NFT craze.

Josh Goodstadt started his licensing career by following his interests- sports and trading cards. Soon enough he began working at the NFLPA in a trading cards and collectibles position. There, he learned the ins-and-outs of the licensing business, and later moved to HBO. Josh describes orchestrating licensing for Game of Thrones as “a thrilling experience.” He loved the aspect of building it from the ground up: “taking it from nothing to something.”

Next Josh helped launch NBPA’s THINK450, the in-house licensing and business development arm of the NBPA. This undertaking was unique in the licensing industry, he says, because it was essentially “a startup in a mature marketplace.” At THINK450, he currently helps build smart deals that align with the league’s rights and reflect their IP correctly.

One such deal, of course, would be NBA Top Shot…

Since March 2018, several companies have approached THINK450 with cryptocurrency pitches. However, Josh explained why it was Dapper Labs- the company behind Cryptokitties– who won not just the deal, but an ongoing partnership with the NBPA: “They had the track record of success,” he says, also noting that Dapper Labs was “thinking about [NBA Top Shot] in a way beyond just utilizing cryptocurrency.”

Dapper Labs was careful to analyze the customer experience, creating a platform where users didn’t have to purchase cryptocurrency directly. Instead, they could simply pay with a credit card, making the transaction more accessible. Additionally, Dapper took on conceptualizing the creative as well.

“We didn’t want it to just look like a digital trading card. That really wasn’t that interesting to us,” said Josh. And when it came down to it, Dapper Labs delivered with one-of-a-kind video highlights on a completely unique platform.

“We think NFTs are here to stay. [NBA Top Shot] has a social community around it…. We’ve built a baseline of consumers into this space.”

Josh has a good feeling NFTs are here to stay. “I don’t think I could predict it was going to trade at this type of volume,” he says, “but a baseline of consumers [is] now into this space.”

Josh also mentioned that THINK450 is beginning to address reaching out to a younger market. “How do we tell the stories of our membership to a younger audience,  across the board in licensing?” he asks. Specifically, one of the challenges he faces is capturing their attention in a crowded field of content tailor-made for capturing young people’s attention: “Whether it’s TikTok or Instagram…there’s so much competition out there.”

Want to learn more about how THINK450 handles licensing and business development for the National Basketball Players Association? Check out the full episode of the podcast above, or listen on your favorite podcast platform.

And don’t forget to subscribe to The Brainbase Podcast for regular updates, new episode alerts, and more.